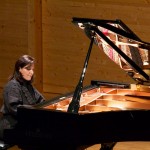 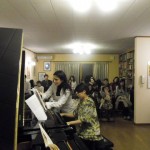 Born in Sardinia and actually living in Vienna.

Her objective is to create a special atmosphere for the audience, more like a drama, opera or theatrical representation, where the story is just taking place in the unique imagination of every single person.

Best pupil of Welsh pianist, composer and teacher Dafydd Llywelyn, who influenced her with the old German-Russian piano tradition as well as with the art of polyphonic piano playing.

She is artistically involved in several roles: pianist, author, musicologic research and analyst of the art of piano interpretation, producer, label owner, mentor of polyphonic and ultra-polyphonic piano playing, teacher of masterclasses.
In March 2009 she performed the last five Beethoven’s piano sonatas in one single evening at Zankel Hall / Carnegie Hall. This event was realized in cooperation with the BCRF founded by Evelyn H.Lauder.

In February 2011 she performed the last five Beethoven’s piano sonatas in one single evening at Sogakudo Concert Hall, Toyko, Japan. This unique recital program can be listened to on YouTube on Roberta Pili’s channel.

Covering a responsible position as a mentor, she finally focusses on raising students’ awareness about what they have learned, how useful it is for them and for their further musical and non-musical development in life.

Roberta Pili is founder and president of The Charles-Valentin Alkan Society of Vienna.